By signing the Protocol of Cooperation, the two institutions only confirmed their firm determination, based on broad and strong foundations of previous cooperation, to continue organizing joint artistic and scientific activities for the benefit of the city of Niš, southeastern Serbia and our country.

Cooperation with the Branch of SASA began during the existence of the Center for Scientific Research of SASA and the University of Niš, and continued immediately after the founding of the Branch (2016).

So far, the Faculty and the Branch have achieved over 40 joint activities. Along with one long-term scientific research project of the Branch, whose team consists mainly of teachers from the Faculty of Arts (Musical Heritage of Southeast Serbia, Contemporary Creativity and Taste Education), they had: 18 concerts, 9 scientific gatherings, 5 exhibitions, and one promotion, one gala academy, one music CD, 3 Proceedings and 3 more in preparation for printing. This truly impressive number of joint activities is a guarantee that the cooperation between the Branch and the Faculty will continue to be just as intensive, with new types of joint work in the field of arts and sciences are announced. 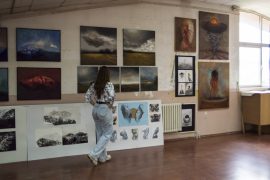